I'm working on a new subway painting. Drawings for the composition have floated around my studio for a couple years and the painting was finally started last September, at the same time as I was working on Flying Torpedo.

Here's how the painting looked recently:

The following was originally planned for the advertising at the top:

However, the partial face of a woman, her hand holding a card, no longer seemed right. After exploring new ideas, I decided to split the ad into two separate ones: 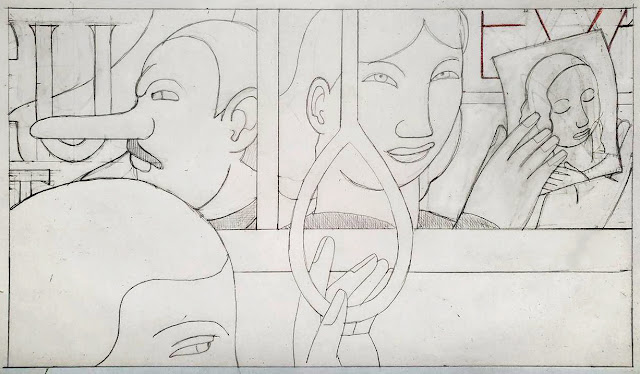 A red-faced Tengu - a creature found in Japanese folklore - on the left. A woman on the right holding a photo of another woman with her eyes shut. The tiers of space and narrative, running from the small photo to the advertisements themselves, and then to the overall composition, had a rhythm and energy that felt right and created an interesting flow.

The painting yesterday, after these changes:

As for why Tengu? I've always wanted to include one in a painting on account of a significant personal event that happened at the Tengu Restaurant in San Diego in 1982. Great sushi too, but  the restaurant is now long closed. 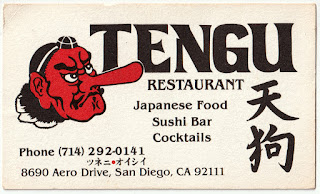 Posted by Andrew Stevovich at 2:54 PM

"There is more power in telling little than in telling all."
- Mark Rothko

“The mind loves the unknown. It loves images whose meanings are unknown, since the meaning of the mind itself is unknown.”
- Magritte
"Now, the idea is to get everything right -- it's not just color or form or space or line -- it's everything all at once."
- Richard Diebenkorn

upcoming:
1 October 2020 -
Adelson Galleries
New York, New York
current:
5 February - 29 March 2020
Greenville County Museum of Art
Greenville, South Carolina
past exhibitions:
4 - 8 December 2019
Miami Art Week
Adelson Galleries
booth AM103
1 June - 30 June 2019
Adelson Cavalier Galleries
Palm Beach, Fl
Adelson Galleries Boston
4 May - 24 June 2018
5 - 10 December 2017
CONTEXT Art Miami
Adelson Galleries, Booth #C107
paintings exhibited:
Donuts, Contemplating a Sculpture, In the Clay Room, and Jessie's Diner
14 September - 14 October 2017
group exhibition
Cavalier Gallery
3 West 57 Street
New York, NY
paintings exhibited:
Subway Loops, Contemplating a Sculpture, In the Clay Room, and Jessie's Diner.
Adelson Galleries, New York
24 March - 25 April 2015
Adelson Galleries Boston
6 February - 15 March 2015
14 May 2014
Art of the Matter, an article by John Spooner about the creative process is in the 14-27 May issue of Improper Bostonian magazine. He writes about my work and about the sculptor, Katherine Houston.
1 March 2014
A photo of my painting Hat Party was used to complement It's My Party: How many hothead academics does it take to solve a riddle? an article by David Pablo Cohen in the February 27th issue of The Paris Review:
It's My party
21 January 2014
The home page of Wikipedia featured my biography today in the "Did You Know" section.
Link to the Wikipedia archive:
Wikipedia Home Page on 21 January 2014
Link to my Wikipedia page:
Andrew Stevovich
14 November 2013
My website has been totally redesigned and updated with photos of over 200 paintings. My plan is to add more images over the next several months until the catalog is fairly complete:
andrewstevovich.com
The website is designed and maintained by:
Transomnebulism
23 January 2013
An article by Jenifer Mangione Vogt about a recent painting has been posted in 'Gallery Gadabout':
"Andrew Stevovich's Chocolate Truffles"
recent solo exhibitions:
2015 Adelson galleries, New York
2015 Adelson Galleries, Boston
2012 Adelson Galleries, Boston
2010 Adelson Galleries, New York
2008-2009 (retrospective)
Boca Raton Museum of Art, Florida
Hudson River Museum, New York